By Janey18th November 2021No Comments 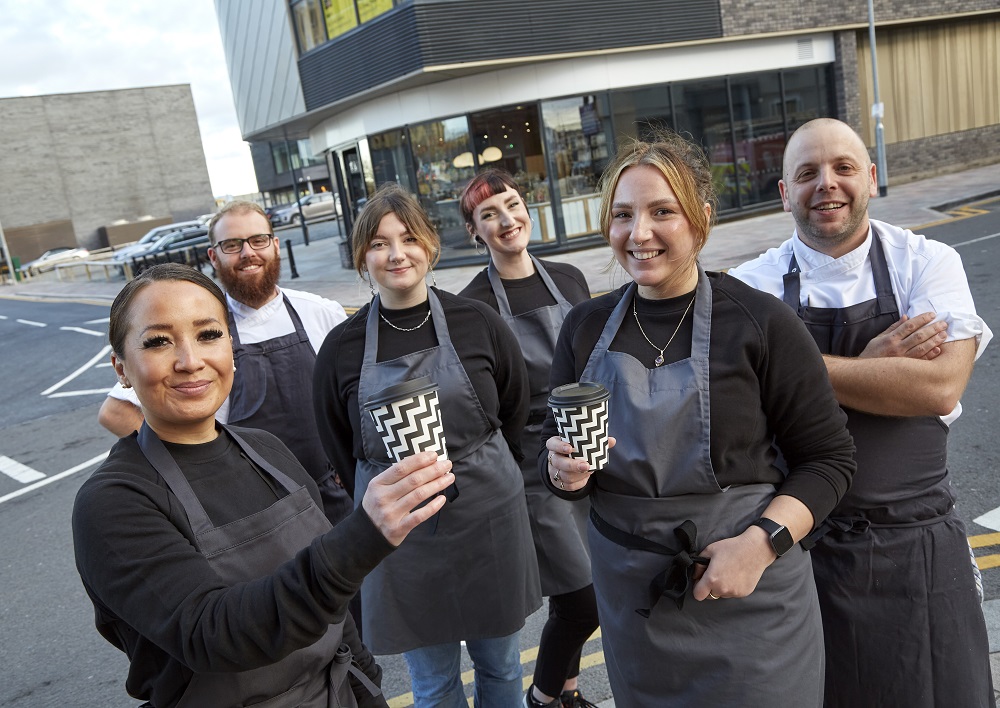 A hugely popular eatery in Hull’s thriving Fruit Market has opened a new takeaway outlet to serve the rapidly growing community of workers in the area.

Nibble opened six years ago opposite the pioneering Centre for Digital Innovation (C4DI) tech hub and has become a firm favourite with workers and visitors alike for its homemade breakfast, brunch and lunch specials and sweet and savoury delights. Anna Lamb, Robyn O’Brien and Lauren Dungworth display a selection of the mouth-watering treats on offer at Next Door by Nibble.

Now, as the second C4DI building becomes home to new businesses and their staff, Next Door by Nibble has opened to provide takeaway breakfast, lunch and beverage options for workers who have limited time to spare.

Next Door by Nibble occupies 1,000 sq ft on the ground floor of the new C4DI building, with an entrance on the corner of Humber Street and Queen Street. It is having a phased opening between 8am and 4pm, seven days a week.

The Nibble team has grown from just three staff when it opened its doors in 2016 to a total of 28 today across the business, including eight new jobs created by the opening of Next Door by Nibble.

The opening comes as the Fruit Market continues to grow as a commercial community, with hundreds of workers now based at Arco’s newly-opened head office. Next Door by Nibble is based on the corner of Humber Street and Queen Street.

The latest C4DI building is also rapidly filling up, with the 60-strong team of digital retail marketing agency Summit Media having recently moved in and another major tech business due to relocate there early in the new year.

Nibble owner Anna Lamb said: “We’re really excited about Next Door by Nibble. It’s a new challenge, it’s nice to create a new menu and concept and we want to help people with busy lifestyles who haven’t got much time to wait around.

“Nibble is focused on breakfast, brunch, lunch and different homemade specials every day. Next Door by Nibble offers a really good mixture of healthy, fresh food that will keep you going during the day, but also offer a naughty bun or a sandwich, if that’s what you fancy.

“As you walk in, there is a huge deli-style counter with salads, grains and greens, proteins, sandwiches, cakes, soups and daily specials available. Your order is made there and then and you can get back to your day.” Nibble’s growth has reflected the remarkable regeneration of the Fruit Market. Launched when the area was still largely derelict, the café has become a mainstay of the community as the area has become a vibrant urban village.

The catalyst for the regeneration has been Hull-based commercial developer Wykeland Group’s investment in the @TheDock tech campus, which features the C4DI buildings. Nibble  was established when the first C4DI building opened, to ensure the new community of tech specialists had a great place for breakfast, brunch and lunch minutes from their desks.

The pace of change has accelerated over recent years, with huge investment driven by the Wykeland Beal joint venture of Wykeland and housebuilder Beal Homes, working in partnership with Hull City Council. The rejuvenation of the area has transformed the Fruit Market into a thriving commercial, creative, cultural and residential community.

In addition to Nibble and Next Door by Nibble, the business also operates The Makery, on the first floor of Lock Keepers Cottage on Hull Marina, where sweet and savoury bakes are made in two bakery rooms. The Nibble team also provides an outside catering service from The Makery. Next Door by Nibble has opened following completion of a fit-out by Hull-based Chameleon Business Interiors. While seating isn’t available inside, tables will be in place outside during spring and summer months.

Owner Anna said the support of the local business community and increased footfall in the Fruit Market, despite the pandemic, had helped the business to continue to grow, but the key to its success was the dedication of her team.

She added: “Nibble has become more than I ever dreamed it could be and that’s all down to the team, so it’s great that we’re expanding and creating new jobs.

“The past six years have flown by and it’s great to see how the area has become such a fantastic destination. We’ve loved seeing all the regeneration take place around us and we’ve grown with other businesses in the community.

“We love everything about being part of this community. Wykeland have been really supportive and have helped us and other businesses here to develop and grow. We’ve also all been blown away by how supportive and caring the business community and customers were to us during lockdown.

“We love serving people, having a chat with our customers and making a difference.” David Donkin, Property Director at Wykeland, which is also based the Fruit Market, said: “Nibble has been a big part of the success of @TheDock and the Fruit Market and it’s really exciting that the business is expanding as the area continues to grow.

“Anna and her team have done so much to make the Fruit Market such a special place and we’re delighted Next Door by Nibble has now opened to build on the Nibble success story.

“Workers in the Fruit Market and visitors to the area now have even more choice, particularly when time is of the essence, and can be sure of continuing to enjoy the quality and service that Nibble is so well known for.” One of the sweet treats on offer at Next Door by Nibble.